I’m a yeller. I started out my motherhood with the promise not to yell, but quickly broke that promise. To be clear, I’m not talking about verbal abuse here. I’m talking about raising my voice to make a point, reacting out of my anger or frustration. I came to the conclusion that yelling is a normal part of motherhood and a piece of who I am. Plus, when a Cuban girl and an Italian boy get married and have four kids in five years, it’s a loud house, and yelling is essential to survival.

You know how God slowly changes your heart without you really even noticing? Then all of a sudden a topic comes up one day and you notice you feel way differently about it than you did a year ago? God has done that to me multiple times with some pretty important issues, and that’s what He did with yelling.

I remember exactly where I was standing in our tiny two-bedroom condo that rainy day. We had just moved from sunny Southern California to beautiful, but very different Northwest Arkansas. We were living in this tiny place for six months to give us time to become familiar with the area and find a rental house. It was stressful, tense, and incredibly frustrating. I was adjusting to living with no familiar people around me, the kids missed their grandparents, and I was waiting for God to show me why He called us out here. I stood between the front door and the staircase and yelled at him. I yelled so loud and so hard that I felt it in my stomach. When I met his eyes, everything changed.

My small, but strong-willed five year old looked back at me with a little bit of fear and a lot of desperation in his eyes. I could tell he wanted to say something, but knew he’d be met with more screaming from the tyrant who had taken over his mommy. Right there in that humbling moment of motherhood failure, God tapped on my heart and whispered, “this isn’t what I want for you. Or them.”

Over the next few days, God continued to draw my attention to my habit of yelling. I decided to do a thirty day challenge with myself and cut yelling out completely. When you have a blog and a following, you have automatic, heavy accountability, so I shared my challenge on social media, the blog, and started Periscoping my progress. (Note: I’m off Periscope now, but I do live stream in my Facebook group regularly. Request to join the party HERE)

I found myself quickly surrounded by other moms who struggled with yelling. Some were already working through books on the subject, some were in denial of how bad it was. I felt more determined than ever to complete the thirty days. If I could do this, maybe they would too.

It’s been one month since I completed the thirty day no yelling challenge. Here’s what I learned from it.

1. Yelling is my answer to almost every frustration in my life.

Once I made the decision not to yell, my eyes were opened to how often I turn to screams as a solution to problems during the day. It felt like I was sucking in a shout every five minutes at first. I was ashamed of how often I had to stop myself. For the first week, I messed up occasionally. Not because I just couldn’t take it and had to yell at someone, but because yelling had become such a deep-seated habit for me, that it would just come out without a thought!

Since I was suddenly aware of how often I yelled, when I would start and then stop myself, I began to notice my kids’ reactions. Sometimes it was fear, other times it was almost an annoyance. Their faces read “ohh great. Mom’s freaking out again, how can I get through it this time…” The thing is, when I yell, I am trying to accomplish something. I want them to listen to me, respect me, and do what they need to do. Through this challenge I learned that none of that was being accomplished. In fact, just the opposite was. My kids respected me less, they shut down instead of listening to me, and if they did do whatever I was yelling about, it was done out of fear of me or out of just getting me to shut up.

This might seem obvious to you. When I type it it’s obvious to me, yet I was yelling all the time so, apparently it’s not obvious enough  and is worth saying. When I stopped yelling, my relationship with my kids got better incredibly quickly. I noticed my seven-year-old daughter asking to spend time with me, wanting to talk to me and tell me secrets. I noticed my boys wanting me to go outside with them and kick the soccer ball around. It was like they couldn’t get enough of me. During the times when I would start to yell out of habit, it was almost like I could physically see my children pull away from me. Yelling severs closeness; I know that for a fact.

4. Yelling makes my husband shut down.

I did this challenge with my kids in mind, but it impacted my marriage in a very deep way too. I found myself having to hold back the most around my husband. It hurts me to admit this, but I noticed how often I get irritated with him and push him away with my words. Far more often than I’d like to tell you, I found myself biting my tongue with words like “Just do something right!” or “Can you please just take care of one thing yourself?!” The weight of how painful these words are really hung from my heart over the first couple of weeks. Just like with the kids, I saw my husband’s face change when I started to yell. It seemed as if he was a machine that was turned off, a robot who ran out of battery life. He just completely shuts down when I yell. I’ve always been thankful that Brian rarely even yells back at me when I get like that, but having noticed his face, I think this is worse. Over time, as I got better, I saw him moving closer to me in every way. He was happier, lighter, more loving toward me, and wanting to talk to me more. Alongside working on my yelling, I started being more physically affectionate with my husband throughout the day, because touch is his love language. Not yelling gave way to more improvements that didn’t even seem hard to make because I was already conquering the hardest one for me. 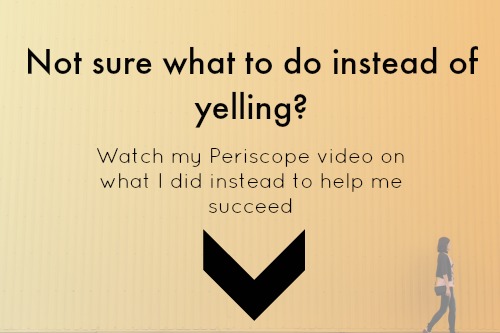 send me the free video now!

5. Yelling opens the door to anxiety in my home.

When I stopped yelling, I was suddenly very aware of all the effects yelling has on my family. I noticed my little girl twiddling her thumbs before she came up to me with a question. I noticed my husband feeling around for my mood before bringing up an idea. I felt like a monster. Even though I really just yelled out of what I felt was necessity and knee-jerk reactions to frustrating moments, it was enough to cause anxiety in the people I love dearly. That broke my heart. As time went on, their trust in my new-found calmness grew and the anxiety fled. I never want to go back to the way things were. I never want to be the cause of anything but love and peace in my home! 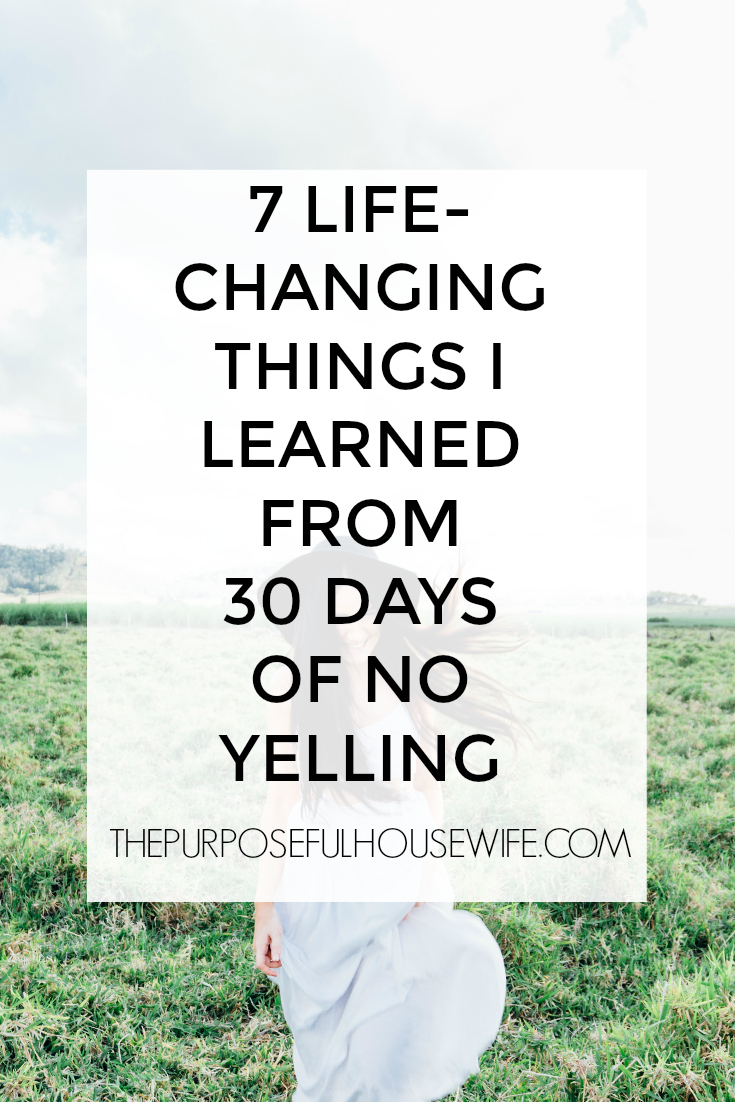 My children were given to me by God to raise up to do great things for His kingdom! When I yell, I am not showing them His love, and I am not being a good steward of what He gave to me.

An overseer, as God’s steward, must be above reproach. He must not be arrogant or quick-tempered or a drunkard or violent or greedy for gain, but hospitable, a lover of good, self-controlled, upright, holy, and disciplined.

My husband is my partner in this life, and he’s to be honored and respected by me as unto the Lord and as an example to my kids. Yelling at my family goes against the will of God for all of us. These are His children I’m treating this way. I know it hurts Him to watch, and I know that’s why He lead me to change.

7. Yelling makes me an unhappy person.

The biggest surprise I found in this challenge was how yelling affected me. I found that I felt lighter, happier, and just less cranky in general throughout the week. The times in the beginning when I would yell out of habit, I noticed it put me in a terrible mood and really darkened my day. I realized a lot of the time when I was in a bad mood was directly related to how I had treated my family that morning.

I hope you take this honest post with a large scoop of grace for me, especially if yelling isn’t something you struggle with. I hope you’ve poked around my blog before and know how much I adore my husband and my babies, and how much of my time is spent creating beautiful memories with them. I hope you don’t judge my parenting solely on this incredibly honest piece of writing. It was meant to reach the mom who yells and thinks it’s okay, and the mom who yells and doesn’t think she can ever stop. I encourage you to take the challenge, and don’t stop just because you slip up. Keep going, start new every time you need to, and watch things change. 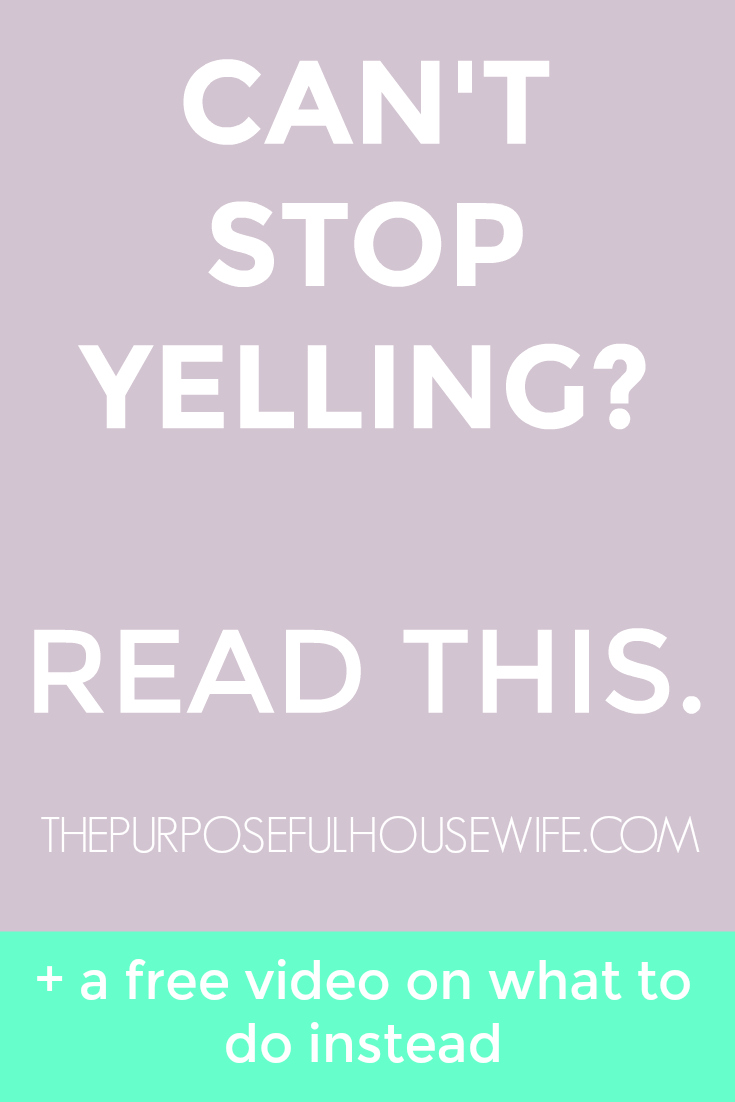