How I Stopped Yelling at My Kids Let me just start off by saying right off the bat that I’m no expert when it comes to not yelling at your kids. It’s something I really have to roll up my sleeves and work at.

It’s a constant struggle. And a constant ongoing discussion between me and my husband and my kids.

That being said, I’ve come a loooooong way and worked my butt off at not yelling. And I’ve figured out what works for me.

I’ve worked really hard and really diligently at building a relationship with my kids. A relationship where they can come to me and tell me, “You know… I don’t really like the way what you’re saying is making me feel.”

And we can press pause. There’s so much power in that.

And newsflash: I’m not a perfect mom. But I am a good mom.

Yelling at my kids doesn’t make me a bad mom. If I was a bad mom, I wouldn’t give a crap about not yelling. If you were a bad mom you wouldn’t be reading this article trying to figure out how to stop yelling, either.

So, let’s just get that straight. You’re a great mom.

Because let’s be honest. Motherhood is a lot.

Motherhood is so constant and there are no days off unless you intentionally set aside time to get away. And even then you’re on call (you know in case the kids try to destroy the babysitter or something).

So, we’re going to mess up. But we’re not aiming for perfect. We’re just aiming to be the best we can be.

So, if you’re a chronic yeller (no judgement) here are some tried and true ways that I’ve found help me stop being a reactive mom—a mom who reacts to every little inconvenience. And become a mom who tries dang hard to respond to her kids positively and with a lot of grace. Even when you want to literally lose your sh** because they’re annoying you so bad.

Create Some Space and Set the Intent for the Day

When my kids were smaller,  I would get them busy in the beginning of the day and take five minutes to breath in and out. Slowly.

Then when I was tempted to go scary mommy on my kids, I would remember that I’d already made the decision to respond differently.

Don’t use the excuse, “Well, I can’t walk away from the kids. They need me. I really can’t just create space to pause.”

Yes, you can. That’s an excuse.

I had three kids under three, and then I had four kids under five so I understand how finding time to create space sounds like a friggin’ impossibility. But you’re never going to stop yelling if you don’t find some time to be calm and intentional about your day.

I cannot stress enough how just breathing in and out slowly will change your whole mindset. Our breath is God-given. It is so powerful and you can completely change your mood just by breathing.

Breathwork is the new meditation. Use. Your. Breath.

I think it was Jonathan Edwards’ mother who used to pull her skirt over her head and stand there and take a deep breath and recollect herself. I mean, is there anything that says #momlife more than that? Do something like that.

When we look back on our own childhoods we don’t really see a lot of specific situations, do we? It’s more of a general feeling. Like a blur.

You would say your childhood felt mostly happy or mostly traumatic or mostly lonely or mostly scary. And you might have some specific memories to back up that feeling, but for the most part, it’s a blur.

Our kids are going to have that same feeling. What will their blur feel like?

These days that we’re spending doing mundane things—teaching them how to tie their shoes, fixing lunches they won’t eat, picking up, dropping off—are the days that are creating that blur.

What will their blur feel like. That’s on us. And that’s a big deal.

I often hear these excuses from women: “I’m just a yeller. I’m loud. I was raised in a yelling household and I’ve always yelled. That’s just the way I am and I can’t stop.”

Uhhhh…Yes you can. You can if you want to.

I’m Cuban and I’ve always been a loud person. But that’s not going to be my excuse. Because that’s ridiculous.

There’s always a way. The question is: do you want to stop?

Change is made up of how much you want it how willing you are to get over yourself and create space for becoming the woman you want to be.

Mothers are so freaking bad ass and amazing and strong. You’re a friggin’ warrior.

And you do have control over how you respond. Own that.

No one is making you yell. Not your spouse, not your kids, not your mother, not your friends. No one.

You can stop yelling! You can do whatever you want.

Let Go of Your Expectations

You’re allowed to be real. You don’t have to respond perfectly. Just don’t react in anger by yelling.

And listen, we’re not aiming to be Mrs. Cleaver or some made-up, imaginary perfect mom. So, let go of the expectations of who you think you’re “supposed” to be.

Yelling is a habit. And how do you break a habit? By continually choosing to not do it. Over and over and over again.

You put tools in place to help you get better. At one point I wore a Rubber Band around my wrist and I would snap it whenever I started yelling.

That little snap would bring me back into the moment. And I would remember what I was doing all of this for.

I would look at their little faces and I would soak up that guilt. And I used that to propel me forward to change.

It’s just like anything else you’re trying to change: eating healthier, marriage stuff, breathing, you have to practice doing it. The muscle that you don’t flex doesn’t grow.

I wish I had a sexier, easier answer, but I don’t. It’s a lot of work to change.

It’s a commitment. And I mess up all the time.

But I keep working at it because I want to change and I’m going to show up again and again until I do. 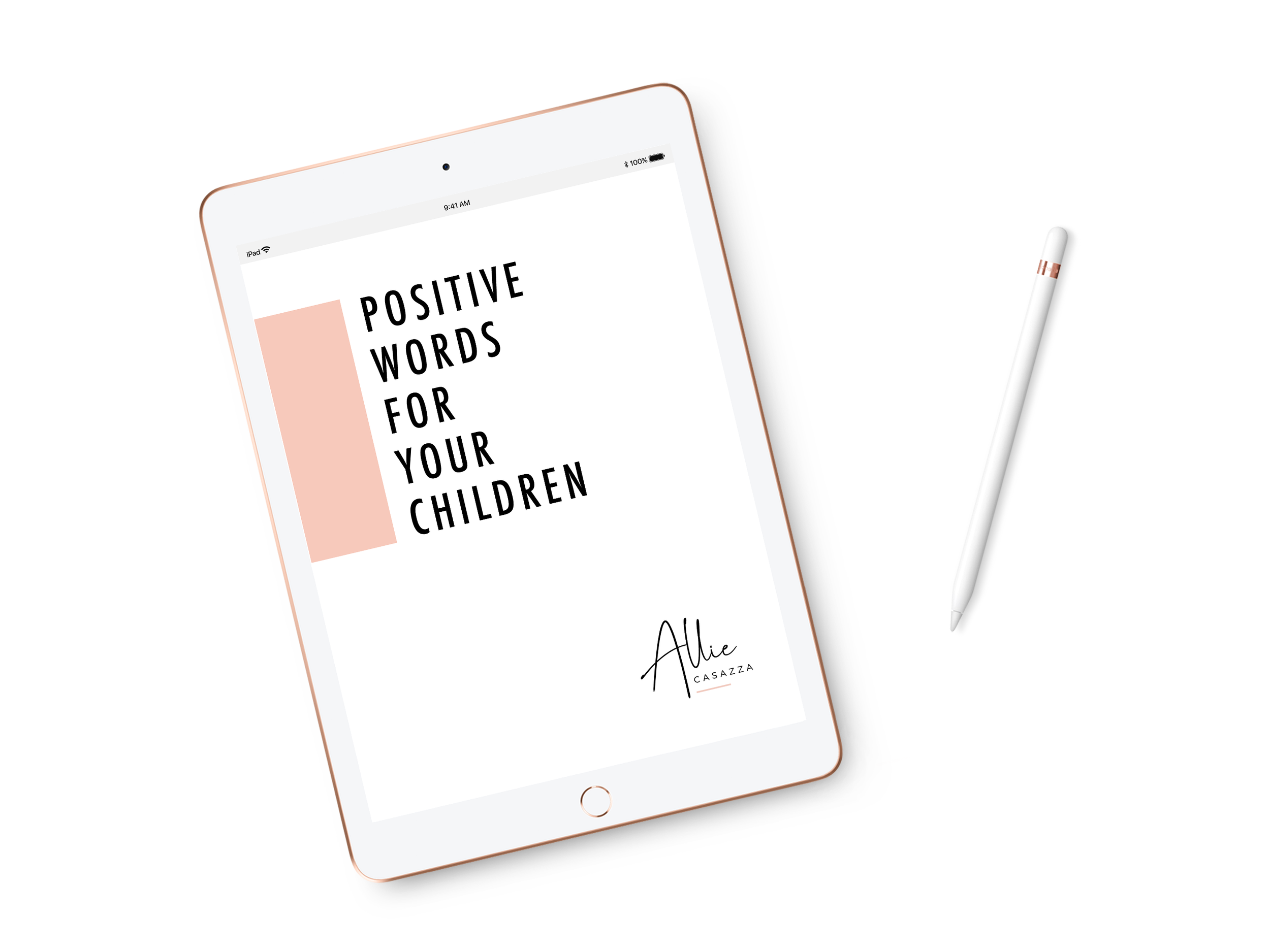 I created a list of positive affirmations and phrases that you can start intentionally using to speak life into your children.

Save it in your phone and look at it as often as you need!

SEND ME THE FREE PDF!

There is going to be something that they look back on later and say, “You know, I always felt like this growing up and I don’t want my kids to feel like that.” And that’s OK!

We have to find the balance between freaking out and worrying what our kids are going to say about us when they’re grown and not caring at all what they’re going to say.

We’re going to have to accept that we’re human and we’re going to mess up. There are going to be things that we wish we hadn’t said and hadn’t done. And we need to own that.

But I think we can all agree that yelling is not good and it’s worth stopping. We want to be able to raise our kids knowing that we’re doing our best.

And that’s all going to come down to how willing we are to do what it takes to change.

Then press pause, take a deep breath, get you a rubber band and go be her! An Open Letter to My Loved Ones About Gift Giving